Chalk this one up to the power of naps. When I was pregnant, I thought for sure I would be able to get through my long to do lists when my not-yet-born daughter would nap. It’s logical; in the pre-baby world, an uninterrupted block of time means the chance to write a few emails, tidy up a workspace or make a few phone calls. However, I quickly learned that those precious nap moments are taken up by attempting to tackle the incredible backlog of things I couldn’t get to in the previous few hours, days, weeks (months?!). I found myself wondering at what point sending a thank you note could be actually rude given the time that’s passed since the gift was given, for example.

Anyway, now that we’re on a solid twice daily nap schedule and I’ve completed or written off many of those backlogged tasks, I accomplished the dream – I made this entire recipe (short of the baking time), during an epic morning nap last week. So you should know that the recipe is not difficult and can be done, at a brisk pace while looking back and forth at a baby monitor, in about an hour. Slicing the rhubarb and strawberries in advance would cut down the time a little as well. 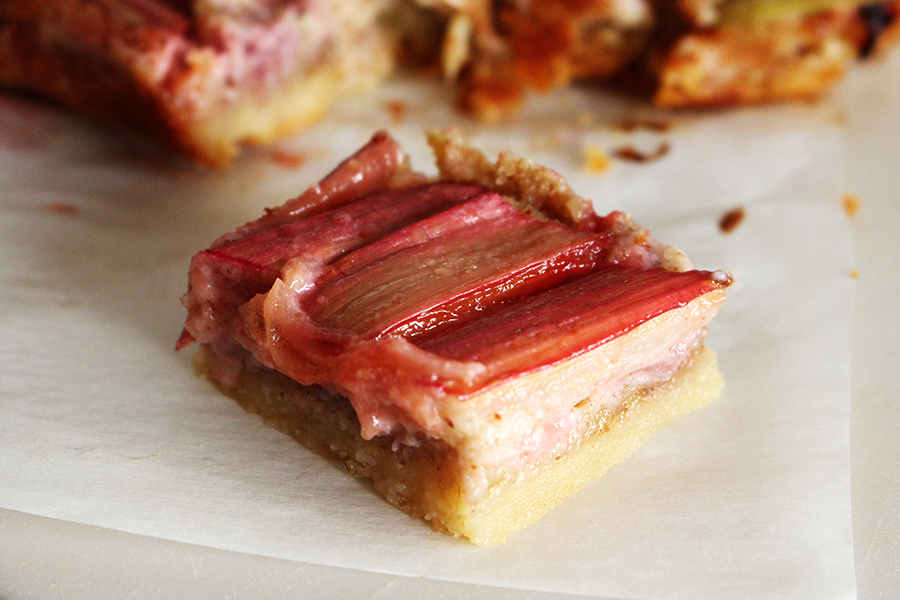 I first saw this recipe on Smitten Kitchen and fell in love with the beautiful ombre chevron pattern of rhubarb. My patience wore thin (baby was going to wake up soon!) when arranging the rhubarb, so I opted for a more simple arrangement, still keeping with the ombre from light green to pink, which was surprisingly easy to accomplish. I added in strawberry because I just love the two flavors of strawberry and rhubarb together, but you could leave that out to really let the rhubarb shine.

For the crust
For the filling