Wait, we have a meat grinder? My husband, who can no longer claim I’m a kitchen minimalist, was in disbelief. Well yes, technically we had received the KitchenAid meat grinder attachments, I explained, but this wasn’t like having a huge meat grinder that would take up space and that we’d never use. It was completely different. And, as I needed an excuse to prove my point, I followed up on my promise to make Shake Shake burgers.

Let it be noted that Shake Shack is exactly one block from our apartment. We can lean out the window and see the line. And the line is where this recipe comes into play. This is for the times when we do not want to waddle out of our apartment, walk one block, and stand in line for more than 20 minutes. And, you know, for the day when we will not live one block from a Shake Shack (but from the way Shake Shacks are popping up everywhere, this could be less of a challenge than one would think).

First question you’re probably wondering: Do I really need to grind my own meat? Yes. You could get by with buying ground meat, but it will not taste as good. And it’s a pretty satisfying experience. When I was a kid, my dad used to make his own breakfast sausage using his KitchenAid attachment, and I remember it being really tasty and easy to do. These were sausage patties (no casings involved as I did not grow up on a farm but in suburban Detroit), and we’d make a big batch and freeze them for lazy Sundays in the future. Grinding your own meat insures you actually know what’s in there and it made a big difference in the finished texture of the burgers.

There are a number of Fake Shack recipes out there, and this is based on one of the best I found via Serious Eats. Along with Fake Shack aficionados comes crazy attention to detail, much of which I left out here. If you want to go full Shack, you’ll need a squirt bottle to apply the sauce to the bun, among other things. Getting the right bun is key, however, and a detail not to be skipped. You want a potato roll bun (I use Martin’s brand) so that it’s both soft and sweet. I found them easily at Fairway, and it might be worth checking out if they’re available in your local store in advance. American cheese is key as well – this is not the time for fancy additions. Nor is it time for subtractions. Confession: I usually order the burger without the Shack sauce. Yep, a regular old plain cheeseburger with lettuce and tomato. That sounded pretty boring, so I went for the full experience in this recipe. The sauce was not at all as mayonnaise-laded as I had assumed/feared, so this cooking experiment may have forever changed my order. Fashioning a burger sleeve out of wax paper is optional (and surprisingly frustrating!). 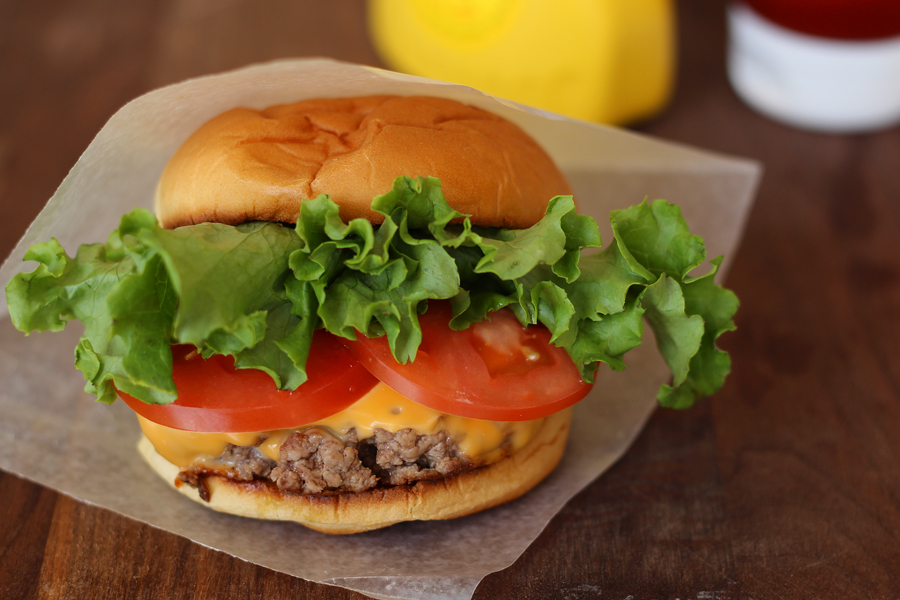 * It might be difficult to find such small quantities of brisket - I bought double the recipe and froze the extra for next time (Oh, and there will be a next time for this recipe, and more after that!)