This week, social media has been a buzz with photos of fried chicken sandwiches from the new Momofuku restaurant, Fuku. First off, yum. But why, David Chang, must you only open your restaurants in the East Village? Now that I live on the Upper West Side, taking multiple subway lines to the East Village for a visit to one of the (now several) Momofuku restaurants rarely happens. Alas, it’s worth it every time, and I’ll forever be hung up on Momofuku’s classic steamed buns. 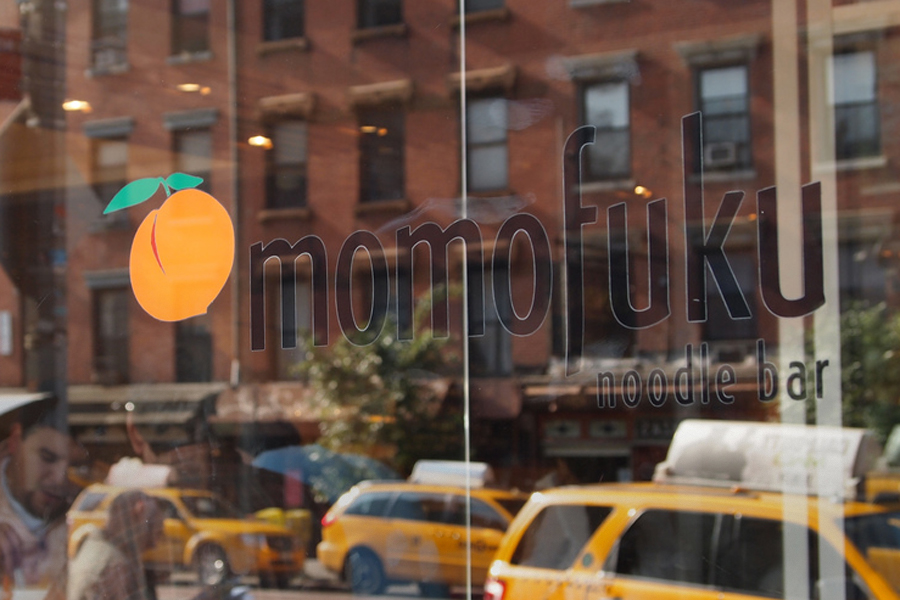 The first time I tried the buns was at Momofuku Ssam bar, and they were loaded up with juicy roasted pork belly. The soft bun and rich roasted pork were topped off with crunchy cucumbers and scallions for an amazing combination of sweet, salty, and fresh flavors. I have to admit, with foodie shame, that I don’t always love pork belly. I know! It was all the rage a few years ago, the slow roasted pork with a thick layer of fat was popping up on menus all over town. It’s that fatty layer that I had trouble with, and what kept me from wanting to make them at home. 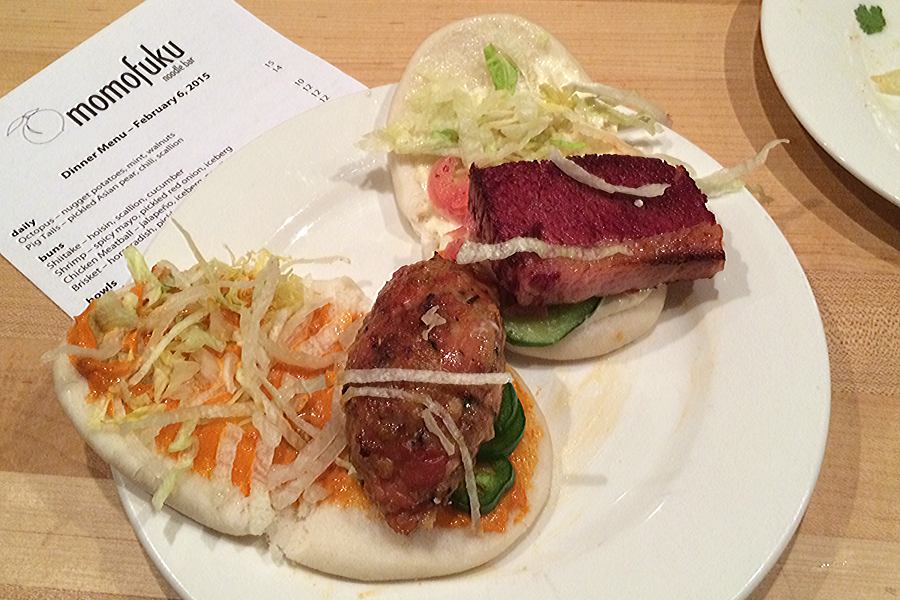 It had been some time since I’d last been to Momofuku (see lazy UWS excuse above), so I didn’t even know they’ve switched up their steamed buns game beyond the classic pork belly. I tasted their latest version with slow-roasted brisket, pickled onions, and cucumber slices and knew this was the one I had to make at home.

As with many restaurant meals, this dish had several components, enough that I couldn’t fit all of them into one video. So let’s tackle the buns first. I drew major inspiration from Merrill Stubbs’ adaptation from the Momofuku cookbook published on Food52. Surprisingly, the recipe doesn’t call for any whacky out-there ingredients necessitating a trip to Chinatown. The base is bread flour, and the only unfamiliar ingredient to me was nonfat dry milk powder, which was easy to find at Fairway. 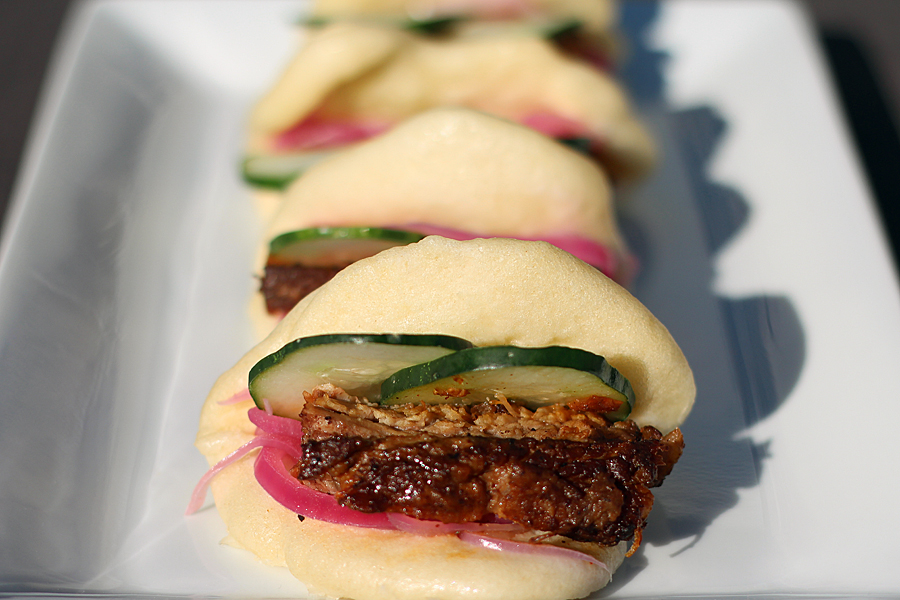 The dough came together easily, once I remembered to add the vegetable shortening (first batch I forgot, and tried to throw it in at the end…one day I’ll include that in a bloopers roll of mishaps as it looked awful). The trick is accounting for all of the rise sessions (there are 3) in your planning. But all that rising gives you plenty of time to roast the brisket, quick pickle the onions, and slice the cucumbers.

Momofuku serves the buns with a horseradish mayonnaise, which you should by all means include unless you don’t care for either (or both, as is the case with me – lame, I know!). Jamming the ingredients in the buns can be an effort, but keep it easy like they do at Momofuku and serve them open faced.

I used this simple and classic brisket slow-cooker recipe from The Kitchn – be sure not to over cook it and use high quality brisket with the fat cap intact. I’ve tried using lean brisket cuts and found the meat to be too dry. Make it the night before and pop it in the fridge; you’ll be able to spoon off any extra fat that’s solidified on the top before slicing and re-heating. 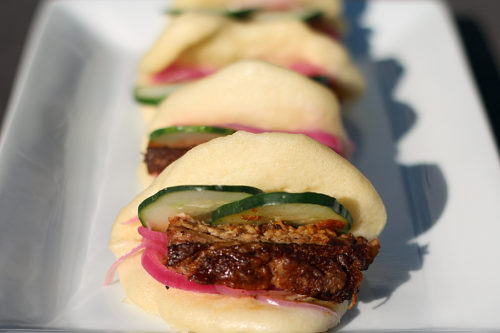 For the red onions:
For the cucumbers:
For the horseradish mayo:

* If you don't have a steamer, make one by placing 3 balls of aluminum foil on a single level of a pan (at least 2 inches deep). Fill with water, bring to a boil, and put a plate on top of the foil balls (making sure it's level). Cover with a tight-fitting lid. * If you opt for a leaner brisket you run the risk of dry meat - go for the fattier kind (ask your butcher) and slice off the fat after cooking for a juicy but still lean result.
* You can also use a dutch oven instead of a slow cooker - cook tightly covered at 325 degrees F for about 3 hours.
* Once the beef is cooked, you can also let it cool and refrigerate it. It will be easier to slice when cold, and the fat will solidify on the top of the liquid, making it easy to scoop off and discard. Reheat in at 300 degrees F in a covered container for 30-45 minutes before serving. 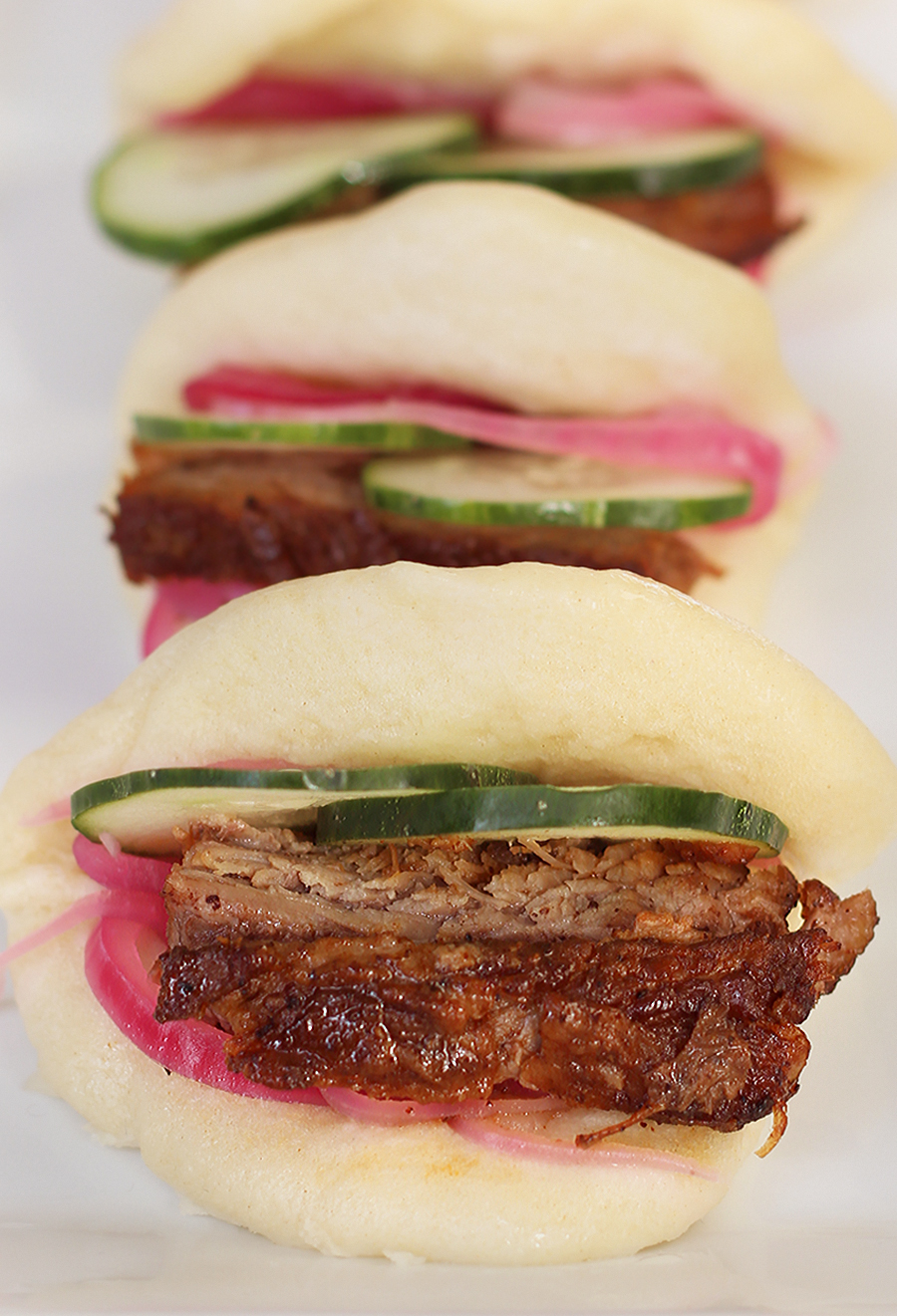